Now, I know most of you will be singing the theme tune in your heads right now, so cut it out! We’re here to check out some stellar toys; buckle up and concentrate already!

The TMNT franchise is world famous; I can’t even walk over a manhole cover without thinking about Donatello and the gang hanging around down there eating pizza and annoying Splinter.

Come to think of it, I always do Shredder’s voice whenever I’m shredding paper… this series really helped me to grow as a turtle… person… you get the idea.

So, let’s cut the waffle and check out some of the toys that kids (and big kids) who love the turtles need in their lives.

This thing has everything. We’re talking flashing lights on the dial, Leonardo and the gang on the face, and a shiny green metal bezel.

The strap even looks a bit like a turtle’s shell! Plus, it’s adjustable and non-toxic, perfect for your kids to wear while channeling in their inner ninja.

I think thee Teenage Mutant Ninja Turtle Super Hero Cosplay Costume shells are the items that I’m most excited about in this list. I mean, just look at them!

These wearable shells are perfect for parties or just recreating the moves of your favourite character around the home. They come with the correct mask and weapons for your chosen Turtle and are suitable for kids.

Don’t worry, the weapons aren’t metal. They’re made from hard plastic, though it might be advisable for your kids not to hit each other with them as they’ll probably hurt!

Which are you picking? I’m going Raphael every time!

If you know a little Turtles fan that lives and breathes the series, then this seat-desk-storage combo would make the ultimate gift for their bedroom.

I mean, who could resist sitting down at this thing to do some early learning or get creative? I could do with something like this to write my articles on… Brandon, are you listening?

Four Teenage Mutant Ninja Turtles Funko Pop! Toys for the price of one…

… well, not really – you’ve still got to play full price for each of them, but it is a four-in-one segment.

Everyone loves Funkos. Whether you grab one or all four of the guys, they make a great addition ti any workspace or play room.

At 3.75″ tall, they don’t take up much room either but still look incredibly detailed and fun. Just look at Raph’s cheeky grin and Michelangelo’s dripping pizza slice.

I never thought I would be saying this, but this Teenage Mutant Ninja Turtles Sewer Cover Shield would look great up on my wall at home!

What’s more, this is an officially licensed Nickelodeon and Viacom International product. Once again, it’s 100% plastic and incredibly light. We’ wouldn’t condone having a big metal disc in your living room!

At 12″, this plastic marvel really does look like a manhole cover though and makes a great toy for anyone whether they’re dressed up as a Ninja Turtle or not.

Though it will probably look less weird if you are…

Ok, so I was never allowed to have stickers on my wall as a kid, which is probably why I’m so excited to include them in this list now.

With lots of different packs on offer, Turtles fans can decorate their bedroom or play space with all the main characters including the incredibly brave April O’Neil!

These decals are easy to remove and don’t leave any residue when you’re done… so you won’t need to explain to the landlord why there’s a turtle on the way if you go to move!

This unreal Teenage Mutant Ninja Turtles Six Piece Action Set has a pretty hefty price tag, making it perfect for the collectors sifting through this list rather than kids saving up their pocket money.

This 6-piece set features all 4 turtles, Shredder, and Splinter, all with rotating heads and a weapons rack.

It even comes in a package that looks like the Turtles’ trusty vehicle!

Listen, anyone that gets this Teenage Mutant Ninja Turtles Weapons Set will feel like the ultimate hero.

That’s the kind of feeling that you should be getting from the best Teenage Mutant Ninja Turtles toys!

Don your chosen bandana, grab a weapon, and fight Shredder’ imaginary foes while on a country walk or in your bedroom.

Just don’t actually break anything while wearing them; we definitely will not be held accountable!

How many of you are looking at this Rise of the Teenage Mutant Ninja Turtles Shell Hog with Raphael set and thinking that you could do with one on your desk?

How many of you are also thinking that the two projectiles that come with this toy would be best fired into your colleagues ears to really mess with them?

This Shell Hog comes with Raphael and lots of cool accessories. Connect it up with the other three vehicles for the greatest attack vehicle the world has ever seen!

I defy anyone to look at these figurines and not smile. Those grins make me want to fight crime and look cool right alongside the turtles… if they were real, of course…

At 2.7″ tall and made of PVC, you can give them to your child safe in the knowledge that they won’t shatter into smithereens (unless your child is the Hulk, then all bets are off).

Now this iTeenage Mutant Ninja Turtles Diecast 1962 VW Bus with Leonardo figure set is one for the camper van fans out there.

A classic Turtles VW T2 Splitty; what more could a person want?

The 1962 bus replica is even coloured like a turtle, and made from strong die-cast metal. It has opening doors and an engine bay too.

Ok, so this is another toy that’s probably aimed towards the older readers, more of a show piece than a plaything. A great addition to any TMNT collection!

Ah, he was bound to turn up at some point! Check out this NECA Teenage Mutant Ninja Turtles Super Shredder Deluxe Action Figure in all its glory.

Shredder is such a cool villain, even at 7″ tall.

He looks like the the real deal too, complete with staff, cape, and more muscles than I know the names for.

Man, I wouldn’t want to meet this freak down a dark alley!

We’ve covered a lot of epic Lego gaming sets recently, but an underground lair with Turtles figurines and secret doors has to be up there with the best.

There’s even an exploding wall in this set as well as storage for all your weapons and other exciting movable parts and objects to discover.

Never mind kid; I want one of these immediately!

Team up with the half-shell heroes themselves and head out an adventure through NYC.

If you’re a massive fan of the show, then you’ll have a field day buying and selling all of the famous locations that the characters visit while fighting crime.

As always, the task of picking the right Monopoly piece is a challenge in itself. Pick from Kraang, Pizza, Mutagen, Shredder Mask, Spike, and a throwing star.

And last but by no means least, we have this incredible Teenage Mutant Ninja Turtles Turtle fighter Tiny Arcade.

Yes now you can play the original arcade game on a 1.5″ screen, small enough to stick in your jacket pocket and carry around from place to place!

There are 3 levels to play through, and the cabinet is a perfect replica of the original full-sized unit you’d find in arcades back in the day.

It uses 3xAAA batteries and even comes with a keychain to hang from your car keys.

Just don’t play while driving, got it? 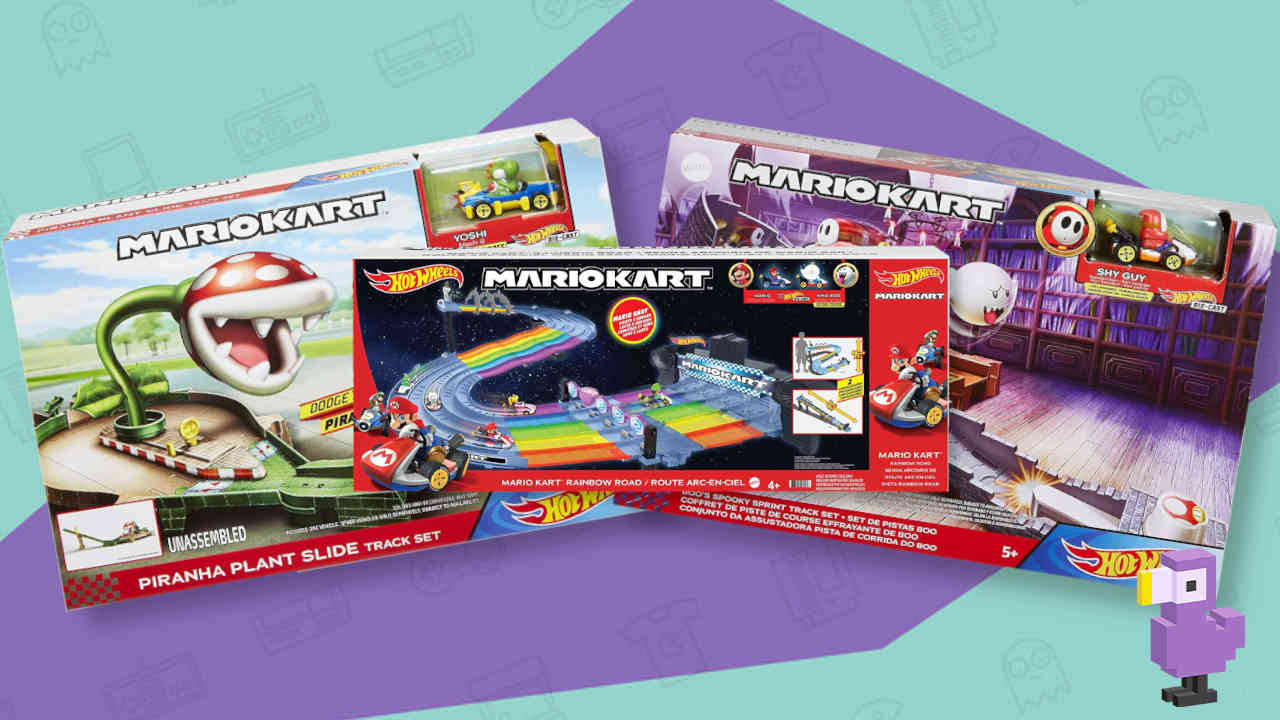